RENT – A Perspective On An Iconic Musical

The astonishing story of RENT’s journey from a 1993 staged reading to 1996 Broadway smash hit is a slice of theatre legend so dramatic that you can imagine it one day being a musical itself.

Following a series of staged readings and workshops at the New York Theatre Workshop between 1993 and 1995, RENT was due to open Off-Broadway on 25 January 1996.  In a shocking turn of events, author Jonathan Larson died suddenly the night before opening.  The show opened as planned, was an immediate hit, and transferred to Broadway within weeks, opening on April 29, 1996 at the Nederlander Theatre.  RENT ran on Broadway for over 12 years, picking up 4 Tony Awards and a Pulitzer Prize for Drama along the way.  It made stars of many of its cast, most notably Idina Menzel, who remains one of the biggest names on modern Broadway, following her subsequent role as Elphaba in “Wicked”. 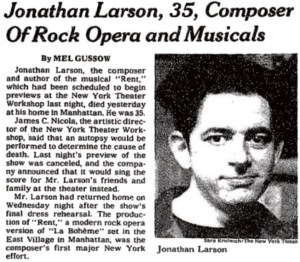 RENT has assumed a place as an iconic Broadway musical, often referred to as “the ‘Hair’ of its generation” (including by Larson himself).  It has toured regularly, been produced all over the world and is constantly in production in regional theatres.  A 20th Anniversary world tour began in 2016, and will continue into 2019.  A “School Edition”, with some of the adult content trimmed, was made available for license in 2009.

Detractors maintain that the scale of RENT’s success is in part due to the melodrama surrounding its opening following Larson’s death, but this is unfair to the material, and by extension to Larson himself.  Morbid curiosity could not form the basis for a 12-year Broadway run, all of RENT’s other achievements and its enduring popularity, including among people who were not born when it opened  (indeed, contrast the ubiquity of RENT with the relatively minor success of the wonderful “Spitfire Grill”, whose lyricist James Alley died aged 38, only weeks before its first full production in 2001).  Notwithstanding its turbulent genesis and many imperfections (which I address below) RENT has thrived because it is a genuinely exciting piece of theatre, with a quite brilliant score and a moving story of love and loss at its core.

AN UNFINISHED MUSICAL
The combined effects of RENT’s overnight success and Larson’s untimely death meant that the show never underwent a customary final round of rewriting and refinement before its swift Broadway transfer, with only minor edits being made before the Broadway opening.  To quote Director Michael Greif, “We all knew this show was unfinished. I feel like the show is still unfinished — the people who worked on it most closely know that most — and it certainly would have been different with Jonathan’s continued participation”.

RENT thus has something of the quality of a “living fossil”, frozen at a moment in time in 1996.  This can be clearly seen in the material itself. While Act 1 is (to my mind) a polished, propulsive and thrilling piece of theatre, Act 2 clearly needed further work.  Despite being filled with great tunes, including the immortal “Seasons of Love”, it feels comparatively haphazard and unfocused.  It rambles, and has an inconclusive, slightly anticlimactic ending.  I offer the following examples.

Firstly, after taking 90 minutes to tell the story of one fateful night in Act 1, Act 2 hastily leapfrogs through a whole year in only 45 minutes.  The action jumps months at a time between numbers, episodically following the stories of the main characters, but never makes clear its reasons for doing so.

The most jarring moment comes with “Contact”, a formless slab of disco, and the most disposable number in the show.  It is preceded by the ballad “Without You”, which juxtaposes the lyric describing Mimi and Roger’s estrangement with Collins silently, tenderly caring for Angel as (s)he succumbs to Aids.  Suddenly, and for no apparent reason, the main characters have energetic sex (“Contact”), then just as abruptly the action jumps to Angel’s funeral and eulogies (“I’ll Cover You – Reprise”).  “Contact” serves no narrative purpose (I mean, we all knew they were having sex, right?) and the whiplash changes in mood make no contextual sense.  The School Edition ditches “Contact” completely.  Angel dies at the end of “Without You” and the action moves directly to the funeral, enhancing this most solemn moment in the show.  I suspect that this change would have been made to the full version of RENT if Jonathan Larson had lived.

The other main shortcoming of Act 2 comes in the final scene.  After drifting apart, the main characters reconvene at the end of another year in their squat.  Mimi is brought in, sick and apparently dying.  As she fades away, Roger cradles her in his arms and sings the “One Song” it has taken him all year and a road trip to write.  That song is “Your Eyes”, and it’s a dreary, nondescript rock ballad.  If that’s the best Roger could do in a year, he might as well not have bothered.  There is a palpable sense of anticlimax.  Inexplicably, Mimi is revived by hearing the song.  The show abruptly ends with a philosophical shoulder-shrug, as the cast declares that Life Goes On…For Now!  It is easy to imagine “Your Eyes” being replaced with a better song, and the ending of the show being re-scripted, if RENT had continued to evolve.

LEGACY
After RENT’s meteoric success, a backlash of sorts was inevitable.  Critics have peevishly criticized its structural and musical flaws, complained that its characters aren’t “authentic”.  They deride the show for allegedly exploiting the victims of Aids,  and sneer at the show’s more ardent fans.  The most common complaint is that the show is dated and “hasn’t aged well”, a lazy argument that any critic can make just by hanging around long enough.  It’s inevitable that a show with such a distinct musical style will start to feel “of its time”, but this doesn’t diminish its artistic value.   More than two decades after its Broadway opening, RENT deservedly remains a show cherished by the musical theatre world and audiences everywhere.

RENT stands proud as a landmark piece of musical theatre.  It was unconventional when it opened: the narrative themes, having a band on stage, the shabbiness and lack of Broadway glitz, the unusual opening sequence were all novel features.  It forever changed ideas of what a musical could be and paved the way for later, more polished shows such as “Spring Awakening” and “Next To Normal”.  Most of all, it remains a compelling theatrical event, written by a gifted young composer who died too soon.  We will never know what Jonathan Larson might have gone on to write.  There is, in that sense, “No day but today…”.