Playing The Light In The Piazza – Guitar

It is a rare treat for any guitarist to play The Light In The Piazza. Adam Guettel’s beautiful, complex neo-classical score is hardly typical Broadway fare, and the show is technically demanding for cast and musicians alike. 5- and 11-piece versions of the orchestration are available. The 11-piece version doubles its three violin parts, giving a total of 14 musicians required for a full production. This combination of unusual style, complexity and large production requirements means that the show is not frequently performed, and since only the 11-piece orchestration includes guitar, opportunities to play the guitar book are even less frequent.

I was lucky enough to play a concert staging of the show for Showtunes Theatre in Seattle, in September 2019. The well-received production featured a stunningly good cast and the full 14-strong orchestra. It was performed on the same stage where Piazza’s world premiere production took place in 2003, giving the event a special sense of homecoming. A brief YouTube video clip of the original 2003 production shows that the orchestrations had grown considerably on the way to Broadway. A fully-staged 2019 revival in London went even further, using a 40-piece orchestra. 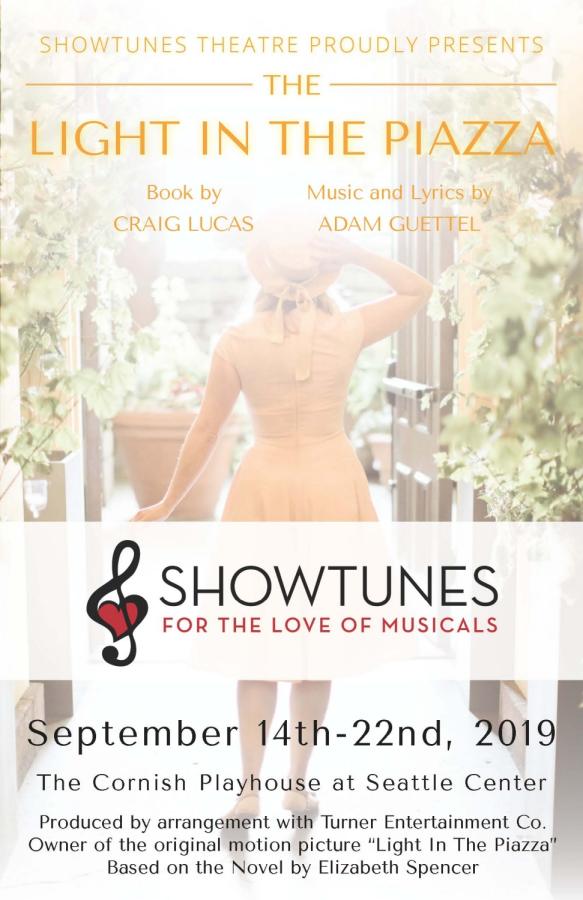 In this article I examine the role of the guitar in the show, and describe my experience playing it. I provide tips for preparing to perform the score, and a detailed description of the equipment I used. I also provide an overview of the guitar book. A separate article (The Light In The Piazza – Detailed Notes On The Guitar Book) includes an in-depth commentary on the book and how I approached playing each number.

THE GUITAR’S ROLE IN THE SHOW
When preparing to play a show I like to consider the guitar’s significance in the ensemble by mentally removing instruments one by one from the orchestration. The idea is to assess how much each instrument would be missed, so I start by removing the least important, and usually end up with just the piano. In this case, I concluded that the guitar was probably the first instrument I would remove if I had to cut instruments because:

A very notable exception to my assessment is #5: “American Dancing”, where the guitar part features very strongly, and would not sound the same played on any other instrument. Music Director Peter Hilliard, in his excellent, extensive blog post on Music Directing The Light In The Piazza, concludes (partly for this reason) that “the most important players are the piano, the harp, the bass, and the guitar…[t]hen the strings and then the reeds. But the orchestration is so good, it’s a shame to lose players”. The importance of the guitar, then, is debatable.

For the guitar, this is a relatively short, but challenging book. A few numbers by way of illustration:

Additionally, there are long passages of rest in several numbers, so this is not a busy book for the guitar.

The book is detailed and accurate; I was not able to identify any errors, although I suspect there might be a few in #5: “American Dancing”. All page turns are good. 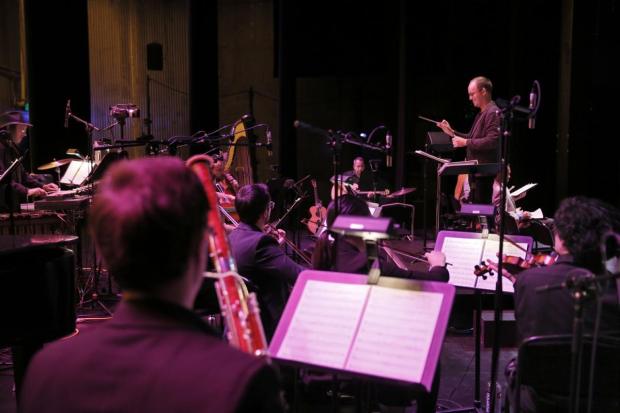 PREPARING TO PLAY THE SHOW
Playing guitar for Piazza is a very different experience from being in most musical theatre ensembles. You are part of a medium-sized orchestra rather than a pit band, and there is a quite different precision and discipline involved. There is almost no scope for ad-libbing or comping; you have to “play the ink”, which means you have to learn the ink. Even though the book is short, the music is difficult to learn and play, for several reasons:

To properly learn and understand the material, I recommend allowing plenty of preparation and practice time, to get the material “in your fingers”. Listen to and play along with the excellent Original Broadway Cast Recording, which includes all of the important numbers, with arrangements mostly identical to those in the book. 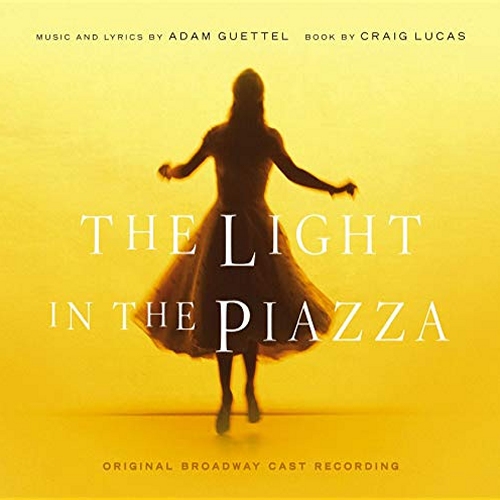 The Light In The Piazza Original Broadway Cast Recording – Cover

I also recommend adding plenty of vocal cues into the book, especially over the longer rest passages, to avoid getting lost in the maze of changing time signatures if your attention wanders for even a few seconds.

PLAYING THE SHOW
I cover this subject in detail in my companion article, The Light In The Piazza – Detailed Notes On The Guitar Book but a few points are worth highlighting in this more general article.

Once you get into rehearsals with the full orchestra and cast, the structure of the songs becomes more apparent. Even so, with the long passages of rest and the extensive use of unusual, alternating and additive time signatures, and frequent changes in tempo, it is easy to get lost. Maintaining attention to the book at all times and counting the rest passages is important.

There are a few quick changes between nylon-string and mandolin (particularly in #3” “The Beauty Is”), and to and from suspended cymbal and whichever stringed instrument you happen to be playing at the time. None of these changes is unmanageable. There are a handful of quick page turns, but again nothing impossible.

While I enjoyed playing the show very much and appreciated having the opportunity to do so, I wasn’t entirely happy with my work on this production. My preparation time was squeezed by work on other productions, and I think I underestimated just how complex the music is. The short rehearsal time and limited run meant that I never got to the point of feeling completely comfortable with the material. Having now learned it, and done some further study for this article, I would love another chance to play The Light In The Piazza, but as I have already pointed out, such opportunities are rare…

Finally, a particular pleasure of performing the show for me was being seated next to the harpist. The harp has some of the richest, loveliest moments in the score and our harpist, the wonderful Catherine Case, was a joy to listen to. 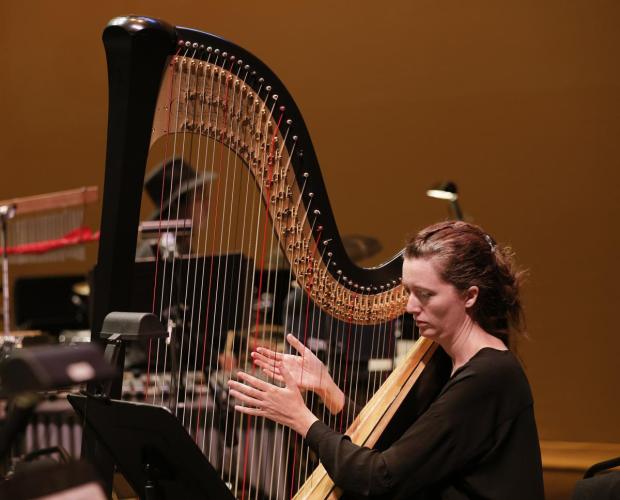 “Our harpist, the wonderful Catherine Case, was a joy to listen to”
Image courtesy of Showtunes Theatre Company and © Chris Bennion 2019

I set all three stringed instruments on stands to my right, which is my preferred configuration for a pit setup. All cables were routed around the periphery to keep them out of the way. The suspended cymbal was to the left of the music stand, and was within easy reach, even when holding a guitar. 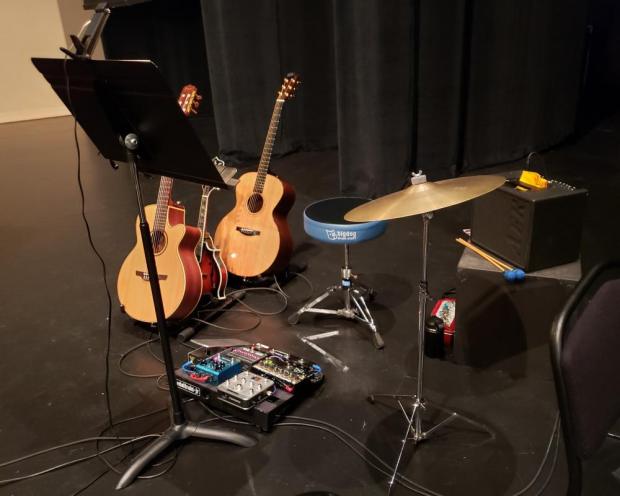 Equipment Setup for The Light In The Piazza – September 2019

Amplification
As usual, I used an AER Compact 60 Mk.3 acoustic instrument amplifier. The amplifier served as my personal monitor, and also has a balanced XLR output, which was used to feed my signal to the house sound board.

All three stringed instruments were routed through the pedalboard into the Channel 1 input. All tone controls were set flat and I didn’t use the onboard reverb, as I had a reverb on the pedalboard. I set the gain to as high a level as possible without causing any clipping, and adjusted the master volume to suit the level I needed for monitoring (master volume doesn’t affect the level going to the XLR output). All volume, tone adjustments and level-balancing for the three instruments were made on the pedalboard, as described below.

Signal Processing & Switching
Since all three stringed instruments had built-in pickups, I took the approach of routing all three through a small pedalboard. Each instrument had its own “tone-shaping”/level control unit, and the signals were routed through a switching device, a volume pedal, a reverb. The typical signal chain was as follows:

Switching: I used a GigRig Quartermaster QMX-4 unit to switch between the three instruments. I am particularly fond of the optical footswitches in these GigRig units, which in combination with the high quality circuitry produces absolutely noiseless switching (without even any clicks as you press the footswitches).

Volume pedal: I used an Ernie Ball VP Jr 25k (the version of the pedal for active signals). The “Jr” versions of their pedals are slightly smaller than the standard versions – always a consideration for small pedal boards.

Reverb: for this show I splashed out on a Strymon Blue Sky reverb pedal, the junior version of their fabulous, but very large Big Sky reverb. Strymon pedals have a reputation for being pricy, but excellent, and I can confirm that the Blue Sky is wonderful and was worth every cent (a quick shout out here to Seattle’s The Guitar Store, which stocks more pedals than any other guitar shop I’ve ever been to). 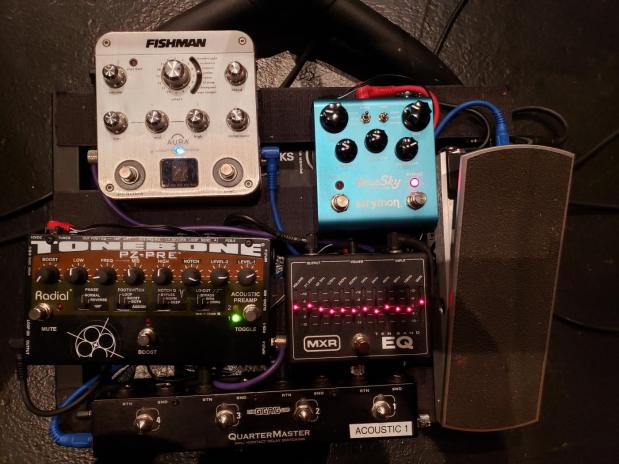 Pedalboard for The Light In The Piazza – September 2019

All of the equipment was mounted on a Pedaltrain JR pedalboard, with a Cioks DC10 power supply mounted beneath to power everything. The pedalboard also had a GigRig Cinco Cinco patch bay mounted beneath on the right side, through which all incoming and outgoing connections to the board were routed (this helped keep cabling neat). So, an example of the complete signal chain for one instrument (let’s use the nylon-string guitar) would be:

This approach meant I could produce exactly the tone I wanted for each instrument, balance their relative levels, then feed a single signal from the pedal board to my amplifier and on to the house.

Other Equipment
I used a Keyser Classical Guitar Capo for the nylon-string guitar, a Blue Chip CT55 pick for the mandolin, and my old favorite Big Dog Drum Stool. I prefer the drum stool because it gives you a bit more space around you than a chair, and this is often an important consideration in pit work. I used Sally Hansen Advanced Hard As Nails to keep my fingernails in shape while preparing for and playing the show.

CONCLUSIONS
The Light In The Piazza is wonderful score, which stands apart from most recent musical theatre repertoire in terms of its sophistication and style. Playing it is a rare and exciting opportunity for a guitarist (indeed, for any musician). Grab it if you get the chance, and prepare to be stretched; this is orchestral playing, not your typical pit ensemble gig. Allow plenty of time for preparation, and don’t underestimate the difficulty of the material, particularly the two numbers played on an unusually-tuned steel-string acoustic guitar.